The RNA genome of Lyssaviruses is 12 kilobases long, non-segmented and of negative polarity encoding five viral proteins (3´ to 5´): nucleoprotein N, phosphoprotein P, matrix protein M, glycoprotein G and polymerase L. The bullet-shaped lyssavirus particle has 100–300 nm in length and 75 nm in diameter. It is composed of two structural and functional units:

The lipid bilayer from the host cell builds the outer envelope. It is covered with spike like projections corresponding to G-Protein trimers, which recognise and bind cell receptors. The G-Protein is essential for lyssavirus pathogenicity and for the induction of the immune response.

The internal ribonucleokapsid (RNP) is of helical structure and is composed of the genomic RNA intimately associated with protein N, polymerase L and its cofactor protein P (formerly named M1). The ribonucleocapsid complex ensures genome transcription and replication in the cytoplasm. 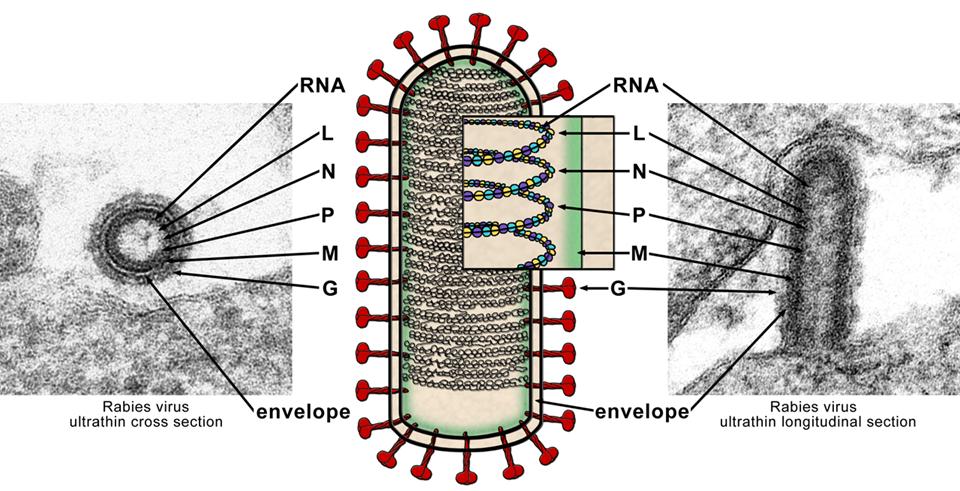 The matrix protein M (formerly named M2) occupies an intermediate position between the ribonucleocapsid and the envelope, and is responsible for virus budding and the bullet-shaped morphology.